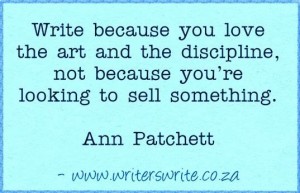 Once again, I’m inclined to write about the ability (or otherwise) of writers to achieve commercial success and / or recognition for their writing. This follows complaints from some would-be authors:

a) An indie author complains that their books aren’t selling enough to enable them to give up work and write full time.

b) An unpublished author complains about continuing rejections from agents and publishers.

Both complainants stated that they’d been working hard for some time to produce the best books they could, and they’d paid out for editing services – one of them, a considerable amount, well into four figures in dollars.

But the thing to remember? No one owes you a living. And the other thing to remember? The best books don’t necessarily sell, and some bad books sell tons. Fifty Shades of Whatever-It-Was sold HUGE numbers, but everyone freely admits the writing was a bit dodgy. Dan Brown is a multi-millionaire on the back of his conspiracy thrillers. Quality of writing? Meh.

If you look at the best sellers in any book list, you might be surprised at what you see. I’ve just looked, but I’m not surprised. The first fiction book (Girl On A Train) comes in at 14th . And it’s the only fiction book on the list. The rest of the top 20 is made up of colouring books and food / diet / body and mind health books. How can you expect to make money writing fiction these days? What can you do?

It’s simply that. Too much time is spent on whining about making money from writing, when time can be better spent actually, you know, writing. Because that’s what writers do. And if you’re already self-published, what’s the best way of increasing sales? Write more stuff.

Slowly, authors and self-publishers are realising that they’re shifting away from the core desires that got them into this game in the first place. They want to tell stories. But self-publishing has turned authors into entrepreneurs. Even traditionally-published authors are requested to have a presence on social media, and run a website and blog, and update on Facebook. Although that is important for sales, it’s sometimes tempting to do too much of that, and less of the storytelling.

So make 2016 the year that you write some more new stuff. Novels, short stories, any creative fiction. You won’t regret it.

Don’t just take my word for it.