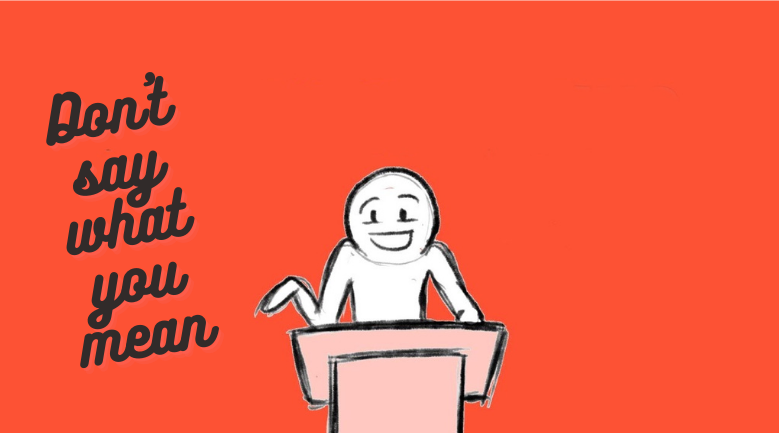 What’s that, you ask?

It’s the way that communicators can use non-explicit words and phrases to convey information they don’t want to be held to account over at a later date.

That was a big sentence.

Let’s pick an example shall we? Think about the riot in the Capitol building on January 6th. If you’ve been living under a rock (and, to some extent, who could blame you if you have?) President Donald Trump attended some rally or other in Washington, and after his (and other people’s) speeches, a few thousand people marched ‘down the road’ to the Capitol building where they were trying to complete the final stage in the inordinately long process of confirming a new President of the country. Once there, they broke in and rampaged around the hallowed halls of the centre of American democracy,

Cue much soul-searching and hand-wringing. “How could this happen?” they asked, with their innocent little faces looking amongst each other. “I did nothing wrong,” said the President. And indeed, when we later examine his speech on that day, nowhere did he specifically tell the crowd to cause trouble. In fact, he specifically told them to behave and protest legally. Were they listening? No, they were not. And why not?

Because they’d been fed a diet of indirect verbal communications for years. Literally.

There are too many examples to quote here. But what Trump did was speak and Tweet in a very simple language. He spoke to the fears of ordinary people. He supported police officers and told them it was okay to treat prisoners roughly.

If you want to see more examples of his aggressive language, read the following article.

Here in the UK, the pro-Leave party has called on nostalgic and militaristic language to appeal to a core base. We’re fighting for our rights, the EU is painted as the enemy across the water, we’re Taking Back Control which had been taken from us by an unelected bureaucracy.

What does this mean for authors? It’s the verbal equivalent of ‘show not tell’, one of the writing mantras. There are some great examples here https://blog.reedsy.com/show-dont-tell/ (you can find others, too), and that page also includes dialogue show and tell, talking about the rhythms of speech, short and punchy sentences, and so on.

But there is a deeper idea, too.

The idea that you can create an impression of the character through the way that they speak and the non-specific wording they use.

Here’s an example – take the phrase “I think you need to leave the room right now.”

It’s a fairly innocuous phrase. Is there a deeper undercurrent to it?

“I can’t believe you did this again. After I’ve told you and told you until I’m blue in the face. What more can I do? I CAN’T BELIEVE WHAT YOU’VE DONE! I AM SO ANGRY WITH YOU!” She paused, breathing hard. “I think you need to leave the room right now.”

She looked at her watch. “You’re going to be late. You know what Gavin is like when people are late, and I’d hate to see you get into trouble over this. I know you want to finish this for me, and that’s really lovely.” She looked at her watch again. “I think you need to leave the room right now.”

So, two probably not-very-good examples, but you can see how the same words can mean two different things based on what has gone on before.

Words matter, of course they do, but context matters, too.