Let me say, first off, that I always liked the idea of Scrivener. A piece of software which helped writers to write, not get in the way or prescribe how you should write. I downloaded a trial, back in the Dark Ages, and I was instantly confused. There was too much going on.

David Hewson, a writer I admire, and whose books I’ve enjoyed, talks about Scrivener a lot. He’s even written a book, called “Writing a novel with … Scrivener”. Which I’ve bought and read. I must admit, I’m with him up to a certain point, and then … I get lost.

Other writers on forums and on Facebook talk about Scrivener in reverential terms. Literature and Latte, who market Scrivener, sponsor National Novel Writing Month, and offer special half-price deals for NaNoWriMo winners. I know, because I bought it in 2011.

And I tried it. And I got confused. I downloaded other people’s templates, and tried it again. And got confused. It was my fault, I admit. There was some sort of disconnect between me and the joys of Scrivening (if there is such a verb).

At the start of 100kwords100days, a couple of people asked what software other writers used. Again, Scrivenophiles (if there is such a noun) were vocal in their support of the product, and again I tried it out. And again, I didn’t get it.

This is my Damascene moment. I get it. I now totally get it.

I was happily writing away, using my chosen word processor (Bean, for Mac – a brilliant, simple, easy-to-use word processor with all the stuff you need and none of the stuff you don’t need). I write each chapter separately, starting each file with Chapter 4 (or whatever), saving each chapter separately, and merging all the files together at the end. Safety first, that’s what I say. And then I had a problem. I decided that my wonderful story needed a chapter inserted in the middle of what I’ve already written. Which meant my chapter headings would be all out of sync, and the filenames would be wrong, too. (My chapters had file names like chapter-04-001.doc). And I’d also noticed that some of my chapters were around 800 words long. And some of them were around 3,500 words long. That can’t be right?

So, reluctantly, I opened up Scrivener. Under “Manuscript”, I created a folder called “First Draft”. In there, I added “New Text” called “a-DM enters office. Grief”. My main character, Danni McGregor, entered her office at the police station, and got some grief straight away. I then created another one, called “b-DM/PS go to cafe” and “c-At arcade – murder scene”, “d-Interview at scene with Michael Fraser” and “e-discussion with Hamden over body”. So now, I’m splitting my story into scenes. I don’t care about chapters, whatever they are. I’ll sort those out later.

So I wrote my scenes. I wrote the first one. Then I wrote the second one. Then I wrote the fourth one, because that made more sense to me as the writer. When I’d written half a dozen scenes, I decided that they should go to the murder scene, do all that they needed to there, and then go to the cafe. So I dragged the text title thing “b-DM/PS go to cafe” to below “e-discussion with Hamden over body”. All my lovely text moved with it. No renaming. No renumbering. It was SO EASY. 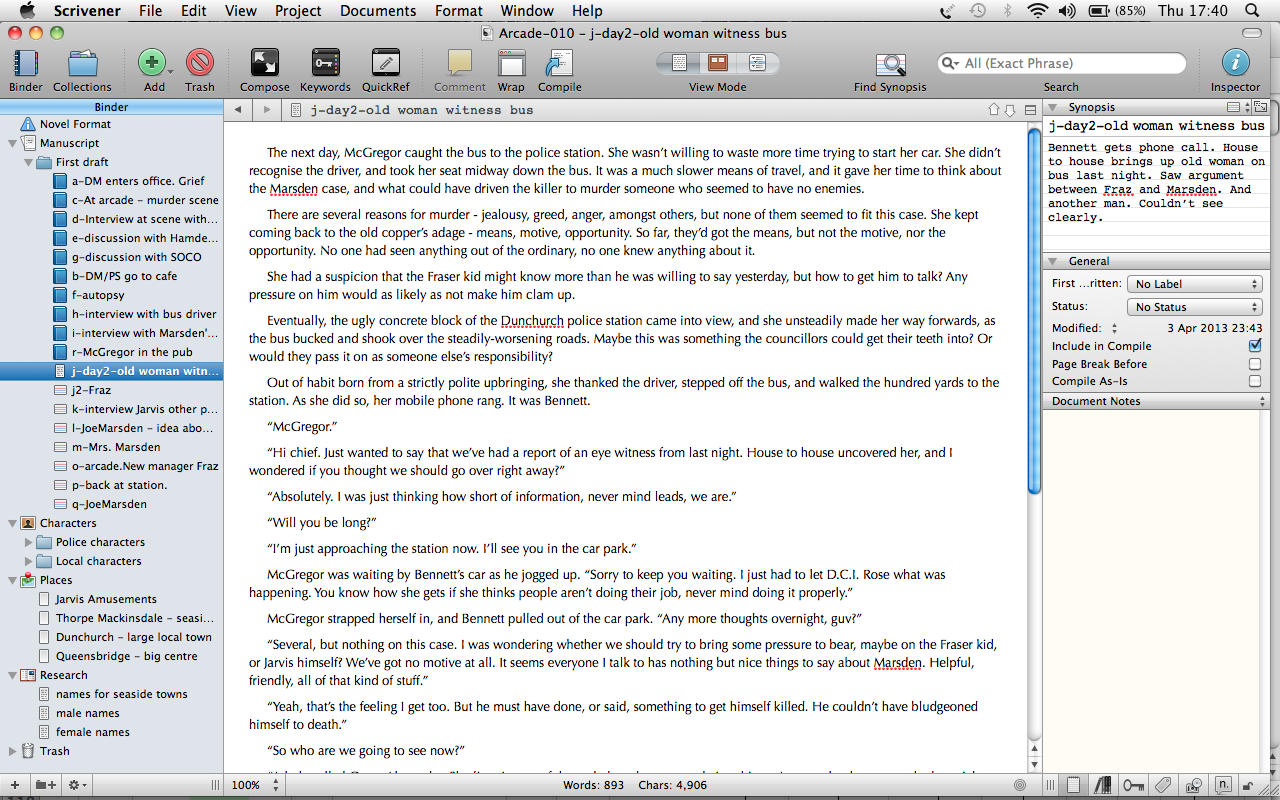 I then put text things under Characters and Places. Under Characters, I’ve got two folders – Police Characters and Local Characters. I’ve just put them in as place markers, more for me to remember their names. Each time I introduce a character, I stick their name in there. It takes 10 seconds. Or less. And I don’t have to fill in character questionnaires or profiles.

Scrivener can create names for you. So I created some. And I copied and pasted the names into a ‘thing’ for names. They were male names, so I renamed the thing. I created some female names, too, and put them in a separate ‘thing’.

Now, under my First Draft manuscript, I change the icon for the ‘things’ so I can see which parts I’ve written. Because I can now write things out of sequence. It doesn’t matter any more. Scrivener works how I want to work.

If I get stuck on a scene, I write a different one. I don’t have to worry which chapter it fits into, because it doesn’t yet. I’ve deleted a load of stuff from the left hand column (apparently called the binder, but I hate that name. It means nothing to me). Where I’ve created my scenes, I’ve added some description into the right hand column (apparently called the Inspector, but it’s different to the Mac Inspector, so that confuses me too).

But, nomenclature apart, I’ve now discovered how it can be used to write the way I want (and need) to write.

In the three days I’ve been using it, I’ve averaged over 5,000 words per day.

P.S. This blog post was written in Bean. Sorry, Scrivener – horses for courses.