For me, writing is a delight, and allows me to create characters and worlds out of thin air.

And then I read the following article:

And it made me angry. Because, yet again, here is a traditionally-published author pouring scorn and derision on the world of self-publishing, and making the same old clichéd statements that trad authors, publishers, and the whole traditional publishing industry spew forth.

Go read it, and come back here. Because, in the great tradition of Joe Konrath http://jakonrath.blogspot.co.uk/, we’re going to do some fisking http://www.urbandictionary.com/define.php?term=Fisking

* I exploded the myth of the wealthy writer.

Only a fool would try and portray writers, as a profession, as being rich. However, it’s not a myth. Some authors are incredibly wealthy; most are not. Think of everyone in the UK who plays football – there are people at many stages of the game, and many who only play because they enjoy it, not because they expect to accumulate great wealth doing it. I would venture to suggest that 99% of football players know they’re never going to become rich, but they continue to play anyway. 99% of authors know they’re not going to become a Stephen King or a James Patterson, but they will continue to write anyway.

* You might as well tell Luke Skywalker to go to the dark side.

I think you have to be careful about how you choose words. Associating self- or indie-publishing (and they are not the same) with the “dark side” supports a certain narrative, which those of us who do self-publish find quite offensive. Self-publishing is not a “dark side”. It is a viable and useful alternative to the traditional system which has been in existence for decades.

What nonsense. The whole point of self-publishing is that you choose what to spend your time doing. It’s a choice, pure and simple. There are no rules, no contracts drawn up by a team of solicitors, to which you can be held for the lifetime of that contract. I self-publish, and I spend far more time writing than I do marketing. And I spend far more time than either of those messing about on social media, but that’s my choice. No one is telling me to do anything.

And traditional publishing can make you behave like an egotistical, arrogant idiot. I mean, really? This cliché of the pushy author/marketer is indicative of some, but by no means, all, self-publishers. In fact, most professional self-publishers I know do not employ these tactics, because they are self-defeating.

* Gatekeepers are saving you from your own ego.

Did the twelve publishers who rejected Harry Potter save J.K. Rowling from her own ego? Gone With The Wind by Margaret Mitchell? Thirty-eight rejections. Stephanie Meyer’s Twilight received fourteen consecutive agency rejections. Need I go on? There is a perception that publishers and agents know what is going to be successful. The truth is, they don’t. The gatekeepers of traditional publishing, as I’ve shown, can reject very successful books for any one of a number of reasons. Now, let’s look at the other side of the coin. Katy Price? Dan Brown? E.L.James? None of those is lauded for the quality of their writing. They are lauded for writing compelling books that millions of people want to buy.

Self-publishing gatekeepers do exist, and they are the only ones that matter – the book buyers.

I think I almost actually agree with this. But let’s not be prescriptive, eh? Some writers have to work at being good. Some writers are just good straight out of the box. Just because one’s own experience has involved a lot of writing and a lot of disappointments, it is not to say that others will, necessarily, be the same. There are plenty of blockbuster debut novelists.

* You can forget Hay festival and the Booker

Some of us might not be interested in them, actually. I’m not a fan of awards, and awards events are a chance for the traditional publishing industry to preen and pose. ‘Quality’ of writing is extremely subjective, and I’ve read Booker-nominated and short listed books that had me shaking my head. I was a member of a book club that featured, one month, a very well-known prize-winning author, and their Booker-nominated latest novel. Only one of the twelve members of the club managed to finish it, and then only because they felt they needed to. No one enjoyed it.

And writing articles attacking a different method of publishing makes you look self-obsessed and out of touch and, actually, a little worried. And arrogant. If you care for your writing, and if you get quality feedback, your writing will stand toe to toe with anything the traditional publishing industry can offer.

She quotes another writer, who tried self-publishing, but it didn’t work for her. Oh dear. Just because your self-published books didn’t do well, no one else’s can?

* With Amazon’s Kindle and CreateSpace as the major outlets, it continues to put money in the coffers of the company largely responsible for destroying author incomes in the first place.

Ah, here we go. The traditional publishing swipe at Amazon, and probably the reason for this article in the first place. Traditional publishing, with agents taking 15% before passing money onto authors, low royalties, bi-annual accounting, delays on payments, restrictions on author’s writing. None of which is good for authors. Traditional publishers have ruled the roost for decades. Before self-publishing came of age, there was no other route to getting your work in front of readers than to be subjected to the humiliation of the submission – wait – reject merry-go-round (unless you count vanity publishing, of course). Now, authors can bypass all that, and put their writing out into the market, for whatever price they like, and how often they like. And let’s not forget – trad publishers are a business, and their business is to make money. They can afford to take a punt on a very few new novelists each year because of the money they make on the blockbusters. The celebrity biographies, the TV chef cookbooks. They sell enough, and make enough money, for them to contract a few new authors a year. Repeat after me – publishers are in business to make money.

* For those who prefer orchestrated backing to blowing their own trumpet, who’d privilege running a narrative scenario over running a small business, who’d rather write adventures than adverts, self-publishing is not the answer.

So, anyone who self-publishes isn’t a proper writer? Really, this is one of the most obscene comments. How arrogant do you have to be to be able to sit on your perch, spitting on those who haven’t managed to attain your lofty (or, actually, not so lofty) status? 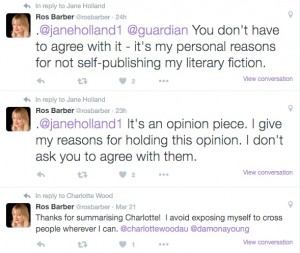 Whilst trying to maintain an innocent face, Ms. Barber has written a rather nasty piece. It’s not, as she suggests, her personal reasons for not self-publishing her literary fiction. It’s an attack on the ethics and skills of anyone who might choose to self-publish. And she has, indeed, exposed herself to a number of cross people – good, professional authors who made a different choice to hers. And that is no reason to attack them.

The comments section of that article is awash with strong responses. Here’s one of the best pieces I’ve seen.

There was a Twitter exchange late last night. I reproduce it below: 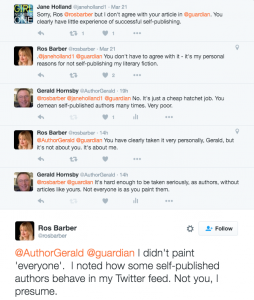 I haven’t engaged any further with Ms. Barber. It’s clear from her Twitter comments to me, and others, that she thinks she was making a personal point about her reasons for not self-publishing her literary fiction. But she paints a picture of “if you self-publish, this is what you do, what you have to do, and what I see people doing”. The article was biased, unfair, and used the same old tired clichés to talk about self-publishing. She implied that self-published books were of poor quality, written by bad writers, and if you self-published, you needed to spend 90% of your time marketing. She was never specific, except in the article headline, and never acknowledged that self-publishers can produce good quality books and write good quality stories. It was throughly negative, which irritated many in the self-publishing community.

Anyway, the more that certain authors retain attitudes like this, the more self-publishers will execute a fundamentally fairer way of publishing their work, and readers will be able to read the books they want to read, and not what some corporate big-wigs in posh offices tell them they want to read. Long live independence!