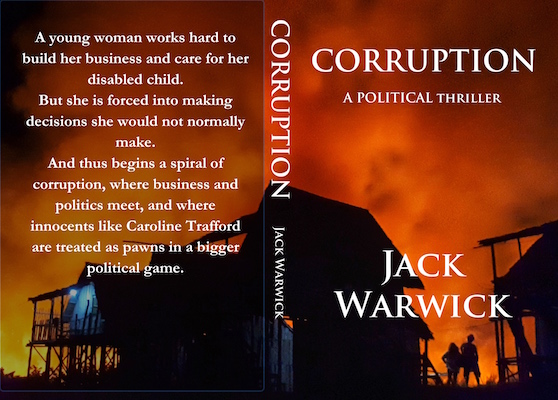 A young woman works hard to build her business and care for her disabled child.
But she is forced into making uncomfortable decisions.
And thus begins a spiral of corruption, where business and politics meet, and where innocents like Caroline Trafford are treated as pawns in a bigger political game.

This is a politically-based story, but I wanted to show how good, hard-working people can get corrupted. When they are guided by people whose morals are, to say the least, questionable. And when they are cornered into lying to cover up mistakes made by others in order to keep their life on track.

In this novel, I introduce Caroline Trafford, an architect, building up her business and providing for her disabled daughter. But one of her employees makes a mistake, and as a result, a worker on a building site dies. She knows that if she admits to the mistake, it would mean the end of her business. But a colleague and friend shows her that there is another way – to put the blame onto someone else, and thus keep her business and continue to care for her child.

Enter Jerry Sanders, a tired and jaded journalist, languishing in a local newspaper in a small town after a career in the national daily newspapers. Acting as court reporter, he hears a case where the name Caroline Trafford comes up. She is now the local MP, but the story behind the death of a building site worker might involve her. His interest is piqued, and he investigates her past, and the connections she now has.

His efforts are thwarted, but he digs in, uncovering information, talking to various people involved. He enlists the help of some old friends, and slowly, the true story begins to emerge. A further tragic accident occurs, but once again, the big cover up is under way. Sanders begins to break down the animosity between himself and Trafford, and he can see she is a victim of circumstance, taking pity on her.

We all make decisions, based on the information we have at the time. But so many of them are compromises, and it was interesting to explore how far someone would compromise their ideals for the sake of their business and, ultimately, their family.

Jerry Sanders, and his friends, are such good, strong characters, that I am making him a series character for a set of cosy / cozy mysteries, some of which will be coming out later this year. The stories require rewriting to be based around them, but I feel it will be worth it. The stories need to be rewritten anyway, and brought up to a professional standard.

Watch out for the Jerry Sanders Investigations, later in 2020!

In the meantime, links for both the ebook and print book versions of “CORRUPTION” are: