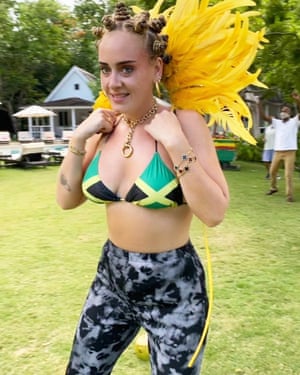 The featured image associated with this blog post is of British singer Adele. She recently celebrated (socially-distanced, of course!) the Notting Hill Carnival.

What is Notting Hill Carnival? Let’s go to our friends at Wikipedia …

“The Notting Hill Carnival is led by members of the British West Indian community, and attracts around two and a half million people annually, making it one of the world’s largest street festivals, and a significant event in Black British culture.” (Wikipedia)

As you can see from the image at the top, Adele (who is white) was celebrating the carnival by dressing in a bikini top in the colours of the Jamaican flag, and her hair was set up in Bantu knots, a traditional African style.

But she has been accused of cultural appropriation. People have called for her to be thrown in jail (!) Others have defended her for celebrating the ‘Spirit of Carnival’.

Cultural Appropriation is a tricky subject for a white-skinned person of European origin. Authors have always written of, and as, the other.

Male authors write female characters, and vice versa. Us fiction authors write from our imagination, fuelled by our experiences and knowledge. We make stuff up all the time. At what point are we in danger of appropriating culture if we write of black characters? Or Eastern European characters? Or of people of different ethnicity, gender or culture than our own?

Fortunately, there is a very well-written article, shared by a fellow author, which should help you navigate these potentially treacherous waters.

The takeaway is that you should write with sensitivity about other cultures; you should avoid clichés, avoid stereotypes, and write well-rounded characters who just happen to be different to the author.

Thank you Angela Nurse https://www.angelacnurse.com for sharing the Tweet from Writers’ HQ https://twitter.com/writers_hq/, and the Irish Times https://www.irishtimes.com/ for publishing the article.
And most of all, Kit de Waal https://www.kitdewaal.com for writing the article.