NaNoWriMo 2013 is upon us, and at the time of writing (28th October), over 157,000 writers have signed up for the challenge. One of the hottest topics (as ever) is the subject of computer software – specifically, what do you use to write your novel?

For me, it’s always been about simplicity and light weight. Microsoft Word has become bloated and heavy (from a software point of view). It takes ages to load up (more than 2 seconds is ages in my book), and slows my computer down because it hogs so much memory.

Before now, I’ve used a simple word processor called “Bean” http://www.bean-osx.com/Bean.html (I’m on Mac). The crucial things are that it’s free, it doesn’t take up memory and is quick to load, it has a live word count, and does first line indents on paragraphs. What more do you need of a word processor? I’m sure there are others, probably just as good.

I had been reading about Scrivener for years, had downloaded a trial version, and last year used my NaNoWriMo winner’s token to take advantage of a very generous offer, and bought it for half price.

So now, I use Scrivener a lot for longer writing.

But Scrivener is a beast of a programme. It is hugely clever, and has a mass of features. It can be overwhelming for a new user. It was for me, before I simplified things. I now have a stripped-down template which allows me to concentrate on my planning and writing. 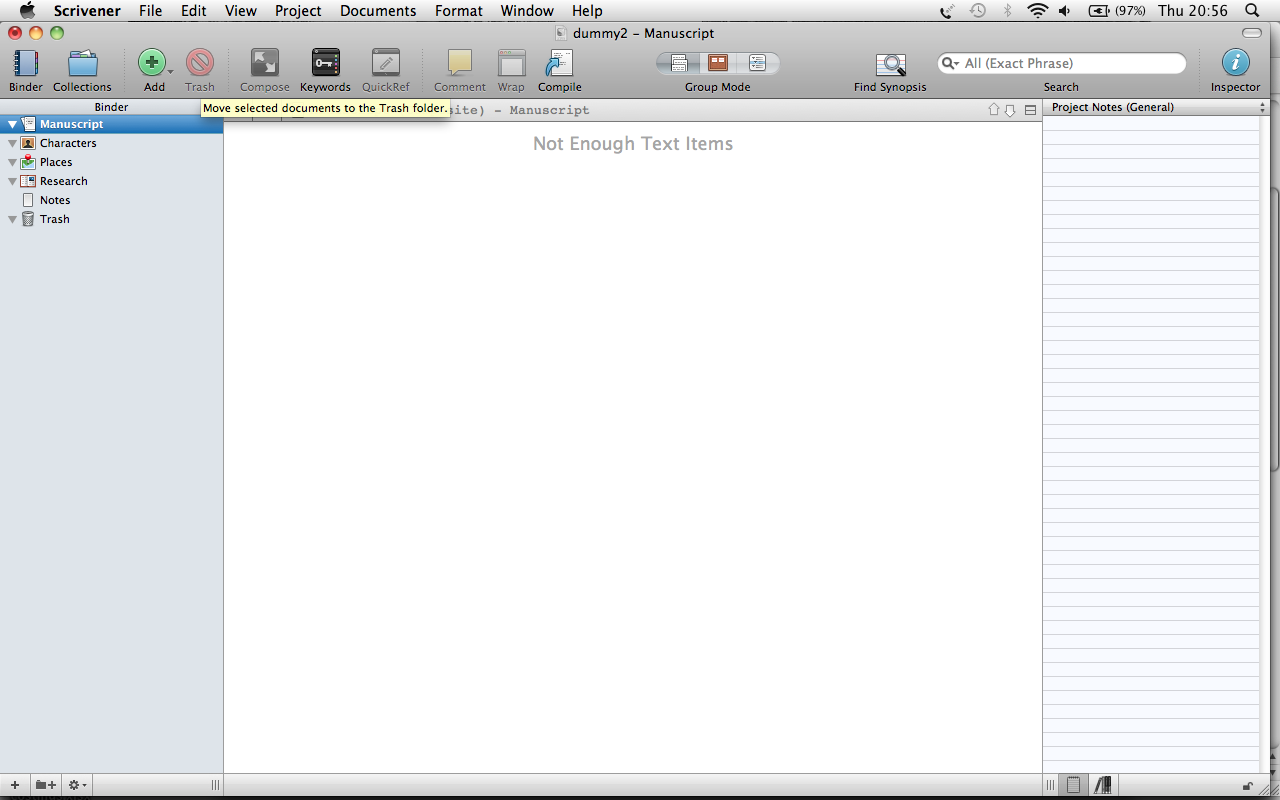 There is no data in this Scrivener sheet yet. But you can see that I have 5 folders in my binder, each of which is completely empty.

1. Manuscript. This is where my actual writing will go. I tend to write in scenes – I’ll organise these into chapters later on, but for the moment, it’s easier for me to construct my story as a series of scenes, as in a film.

2. Characters. Here, I list each of my main characters, some short physical description, and character traits. Also, any relationships to other characters are listed here.

3. Places. Locations where my action takes place, with fictitious town and village names, and I list some of the buildings in these places, such as pub and shop names, with some brief descriptions.

4. Research. Any websites I have come across in my research, and reference material goes here.

5. Notes. This is where I put my initial story notes, and also any notes for future changes in the story. Often, I’ll have an idea for a change in the plot, or a new character, and instead of stopping my writing and changing it all around, I’ll just make a note and move on.

6. Trash. This is a Scrivener folder. When you delete any of your scenes, characters, or places, they are not absolutely deleted, but are sent instead to the trash folder within Scrivener. Just In Case!

Conclusions: I like starting a novel with Scrivener looking like this. It’s got the folders I need, and nothing more to get in the way.